The Tel Aviv Museum of “Art” had an interesting exhibit in 2017 called “Fake?” It’s an exploration of various forms of fakery in art, from some of the most notorious Vermeer forgeries by Han van Meegeren to phony archaeological artifacts. I recently went to see the exhibit and it was a surprisingly interesting and thought-provoking meditation on the question and definition of fakery in art, though of course it was also an exquisite exercise in misdirection.

One of the things that caught my eye was a deconstruction of a famous photograph of Theodor Herzl meeting Kaiser Willheim II on October 28, 1898 outside an agricultural school in Mikveh Israel in what was then Palestine. (Herzl, you’ll remember, is regarded as the father of the modern Zionist movement and makes an appearnce, along with some fishy photos and other red flags, in my paper pulling back the curtain on the Dreyfus Affair hoax.)

The exhibit showed that this famous picture was actually a fake, created by splicing and dicing two different pictures. Here is the famous one: 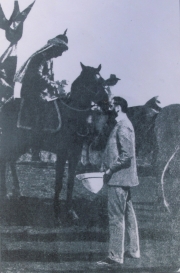 But it’s a paste-up. At this site, we get a cover story for why they faked the photo: “The original photograph of Herzl and the Kaiser was not acceptable as only Herzl’s left foot could be seen in the photo. Herzl, aware of the importance of the photo, ordered its reconstruction. A photo of Herzl was taken on the roof of the school and superimposed onto the photo after seating Kaiser Wilhelm II on the dark horse (instead of the original white stallion).”

That site shares the original photos:

Ha! You’ve got to laugh. The object labeled as Herzl’s left “foot” is clearly not a human foot or leg. It is either that of a horse or, it looks to me, like something coming off the stirrup. And even if it was his left foot, where is his right foot? Was he hopping on one leg when he met the Kaiser? How come that wasn’t part of the “reconstruction?” (Upon further inspection, there appears to be a figure cut off on the far right side of the frame, possibly holding a white hat as in the doctored picture. Is that what they are pointing to and describe as his left foot? If so, we have no indication that this figure is Herzl, or that it is not simply another photomontage itself.)

The photomontage was created by taking the Kaiser, who is sitting atop the white horse in the picture on the left, cutting him out and putting him on the brown horse. Then they pasted Herzl in from the other picture and drew in a line around the brim of his hat. Et voilà, you’ve got yourself a fauxtograph. There were also many other changes made to the foreground, background and the horse.

Here we find another cover story to explain this fauxtograph: “The gate of the Mikve Israel school stood at the end of a long row of palm trees, typical of the place’s beauty. When the German leader arrived, his photographer was so impressed by the greenery that Herzl was left out of the picture taken of the historic occasion.” Look at the original picture. Does it look like the photographer was focused on the greenery? Nope. The story does not check out.

The exhibit at the museum also had this to say: “Many people mistakenly think that since the invention of the graphic software, Photoshop, no visual image can be believed. Yet in reality no image can be believed since 1829, the year photography was discovered, since photographers immediately began manipulating their photos: photomontage, various types of improvements, coloring black and white images, and so on. But are we not all living in a world of virtual reality, based on well-known documentary photographs? Did the American astronauts Neil Armstrong and Buzz Aldrin really reach the moon in 1969 and were they photographed there? As is commonly known, the filmed footage shows an American flag blowing in the background, whereas experts say that wind cannot possibly blow on the moon, leaving this oddity to feed numerous conspiracy theories. Did Dr. Theodor Herzl and the German Kaiser Willhelm II really meet at Mikveh Israel in 1898? (They did, but the famous David Wolffsohn photograph documenting the meeting is a photomontage).”

Wait a second! If the photo is fake, then how do we know they actually met? Because Herzl said so? And if they really did meet, why would they need to fake a photo of the event? As we’ve seen the cover stories are ridiculous. Any honest person would have to conclude that the meeting between Herzl and the Kaiser never happened.

As a parting bonus, we get this link to a Time Magazine slideshow on “Top 10 Doctored Photos.” I don’t want to paste all the photos here, but they include some big names: Civil War Generals, Lenin, Hitler, and even Oprah. But what you’ll notice from these examples, I hope, is that Time Magazine–just like the museum exhibit–is dangling the truth tantalizingly close but then pulling it away.

They’re admitting that pictures are doctored or faked, but then they’re telling you it’s no big deal. The examples they give do not appear to be all that serious, nor are they used to significantly distort historical events or even conjure them out of whole cloth. The message is clear: “Yes, we fake photos, but it’s not really a big deal. When the bad guys do it, it’s for petty propaganda. When we do it, it’s just to make fat women look better or to make sure nobody feels left out. In any case, no harm done!”

In a plaque in the section on fake photographs, the exhibit came even closer to telling the truth before pulling back: “Are we not all living in a world of virtual reality, based on well-known documentary photographs?”

7 thoughts on “Fauxtography Inside the Matrix”

This site uses Akismet to reduce spam. Learn how your comment data is processed.